skip to main | skip to sidebar

But before I go, I ask you, Dear Reader, what do you think is going on here?  At least, the Rubin Foundation's $300G's is being spent wisely on fencing, no? 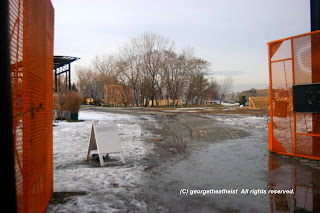 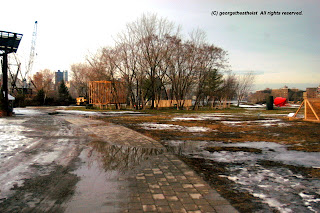 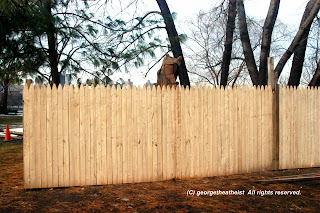 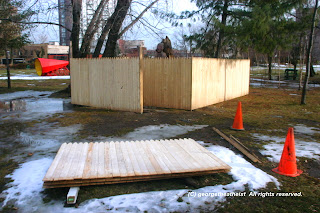 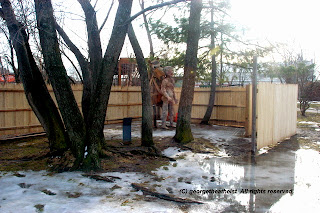 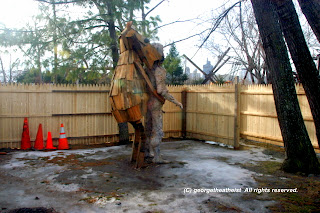 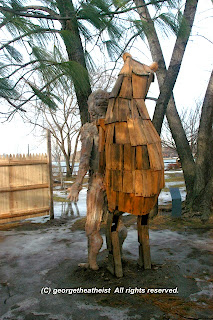 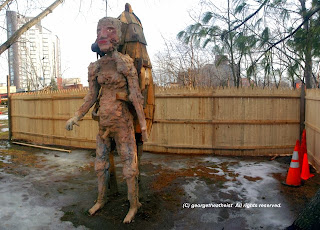 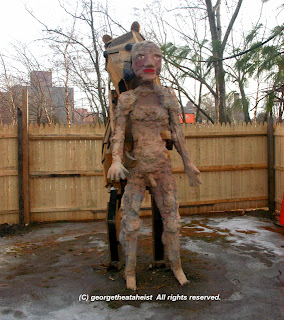 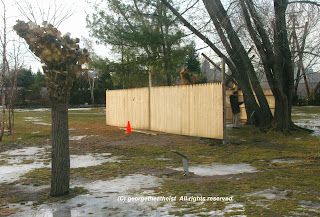 Posted by georgetheatheist at 3:12 PM 9 comments:

Tempus fugit: a visit to "Civic Virtue", one year after its removal from Queens Borough Hall to Green-Wood Cemetery in Brooklyn.

One year ago, December 15, 2012, the statue "Civic Virtue" was removed from its decades long home next to the Queens Borough Hall.  It was transported to the Green-Wood Cemetery in Brooklyn.  You can see photos and the exclusive copyrighted video I made here.  Today, a year later,December 15, 2013, I visited the statue in its new home and bring you the following photos:
﻿ ﻿﻿ ﻿﻿﻿ ﻿﻿ 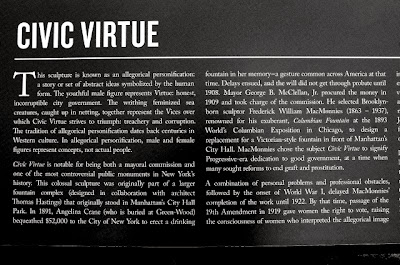 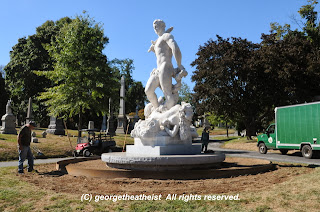 Is this gauche or what? 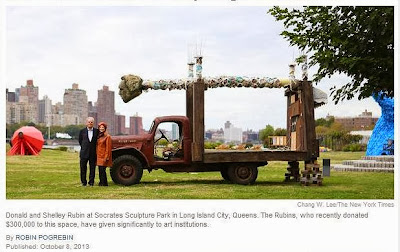 Hello Mrs. and Mr. Rubin! It has come to my attention that in October you were featured and photographed in the New York Times at the Socrates Sculpture Park in Long Island City, Queens. However, nowhere in that photograph do we see the presence of the Socrates' so-called artwork "Bear Eats Man" - a sculpture that shows a bear engaging in bestiality with a male human figure. For your information, it is off to the left in your photo. Did you know that it was there? If so, were you embarassed to be seen with it? Do you approve of its appearance on NYC parkland? 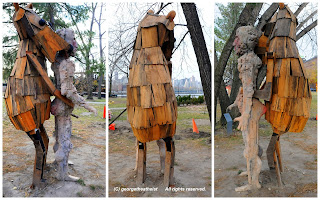 In any event, the New York Times article mentions that your foundation has donated $300,000 to the Socrates Sculpture Park. Mrs. and Mr. Rubin, will these monies be spent on future installations depicting such pornographic activity? For your information, this issue of the "sculpture's" appropriateness in a public venue has recently been explored on two postings of the widely-read and highly-influential Queens Crap blog site which you can read here and here.

Mrs. and Mr. Rubin, your comments on this controversial matter would be welcomed by myself and the readers. The favor of your reply would be appreciated.

Sincerely Yours,
GeorgetheAtheist
Posted by georgetheatheist at 2:20 AM No comments:

Passing the Buck at Socrates. Anything goes.

Dear Ms White:  I recently discovered this work of "art" at the Socrates Sculpture Park in Long Island City.  Please see photos below.  I was curious as to how the Parks Department of which you are the Commissioner ever approved of the emplacement of such an item?   I am certain many citizens would find and have found in it moral offense in its visual obscenity.﻿﻿  Do you?﻿ ﻿﻿﻿
﻿﻿﻿﻿﻿﻿
﻿
﻿
﻿ ﻿ ﻿
﻿﻿﻿﻿﻿Surely you are aware that this so-called "sculpture" is situated on parkland that is tax-payer supported?  Was there ever a public hearing held on the appropriateness of this so-called "sculpture"?﻿﻿ ﻿
﻿
﻿ ﻿ According to the "artist" Thordis Adalsteinsdottir in her statement found on the website of the Socrates Sculpture Park the so-called "work" entitled "Bear Eats Man" represents a "confrontation between man and nature".  Now really, Ms White, do these photos show you, a highly-educated individual - a graduate of Harvard Law School, a bear eating a man?  And just where is that "confrontation"?  It appears to me that the bear has the upper hand here.
Ms White, do you, that highly-educated individual - and graduate of Harvard Law School -  truly believe this cock and bull copy that Ms Adalsteinsdottir has written for the Socrates Sculpture Park﻿﻿﻿: 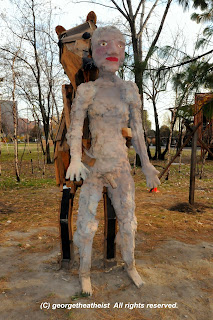 "...this narrative depicts a moment of shock and death."  What?  Death by tumescence? 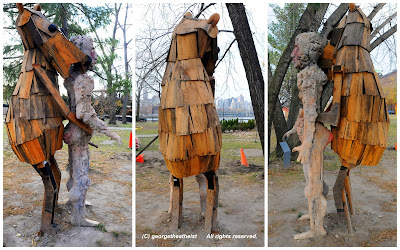 "The wild bear looms over man while sinking his teeth into the man's shoulder."  You see teeth here?  I sense something else is being sunk into that poor fellow.  Even his buttocks are bloody red! 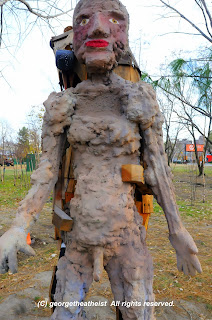 " 'Man' is depicted with eyes wide open, nude and in state [sic] of adrenaline-fed surprise."  Ms White, you are a highly paid individual in the Bloomberg administration.  Did you ever proof-read this amateurish blowsy copy? 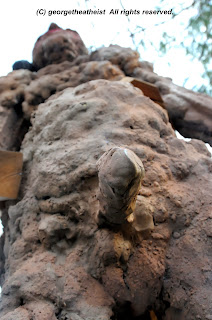 "The wild bear looms over the man while sinking his teeth into the man's shoulder, succumbing to the physical power of nature and exposing his own vulnerability.''  Who succumbs?  The bear?  The teeth?   Or the man's shoulder?  Certainly other body parts do not "succumb". 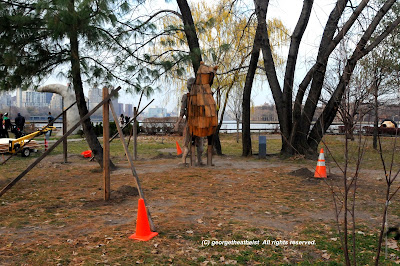 Ms White, little innocent New York City School children visit this park quite often.  Must they be subjected to such an offensive, disgraceful and outrageous depiction of bad taste, questionable "art", and obvious pornography?  I submit this borders on child abuse.  Just what is going on with the New York City Parks Department under your aegis which champions this blatant display of bestiality?

Now you see it. Now you dont.

Drove by today and the sidewalk "art" has been painted over. (See post below.) We've been hornswoggled? The possibilities:  1. A vandal came by with a gray paint can.
2. The artist couldn't stand his/her own oeuvre and destroyed it.  3. The authorities read the riot act.  4. The religious festival has concluded.
﻿﻿﻿
﻿﻿﻿﻿
﻿﻿
﻿

Posted by georgetheatheist at 2:44 PM No comments:

georgetheatheist
The discoverer of fire and music. Follower of the American Dream (whatever and wherever that is). Graduate degree in Hospitality Management. Repo man. Motivational speaker. Bon vivant, boulevardier and a ding dong daddy from Dumas. Inventor of the bald pate head wipe and men's room urinal soap advertising. Understudy for the Ty-D-Bol man. Fluent in Meussurray. Caller to the old Bob Grant radio show and adherent of the Dr. Hermann von Kreutsch School of Psychoanalysis. A hail-fellow-well-met. The Life of the Party. A transformational figure. The sheik of chic. Clark Kent, Zorro, and Fra Diavolo rolled into one. Una vera bella figura! That proverbial talking guy at the podium standing between you and the food. Ya happy? Now, get outta here! :)